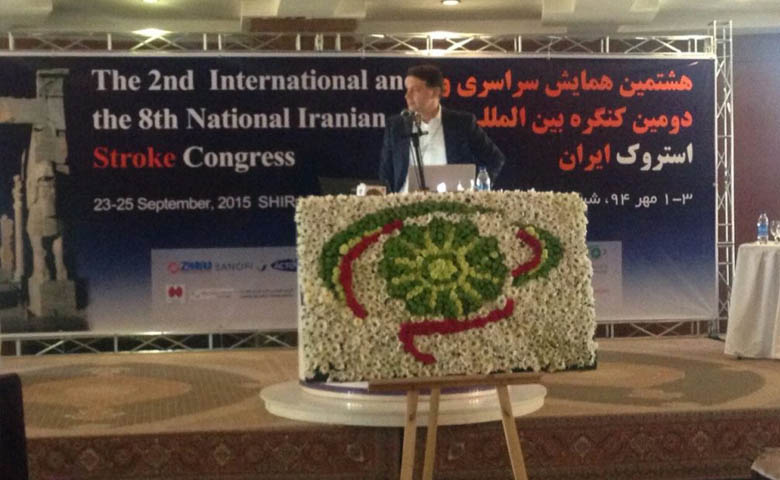 The 2nd international and the 8th Iranian Stroke Congress was held in beautiful city of Shiraz coincide with the feast days of Qurban on 23- 25 September 2015.

This congress in three days was held by the Clinical Research Center of Neurology and Iran Stroke Association, at the Shiraz Grand Hotel located at the gates of the Holy Quran.

Executive secretary of the congress, declared the goals and priorities of the Congress in a message as: Stroke is a serious illness that leading to mortality and morbidity in the community of Iran. In our country, in comparison with western countries and the Middle East and central Asia the number of younger patients with stroke is higher. The neurologist’s community should be more aware to find new diagnostic and therapeutic tools. As well as health policy makers should allocate more funds for prevention and treatment of stroke.  Mr. Doctor Afshin Borhani Haghighi, the specialist in neurologic diseases and fellowship of vascular- interventional neurosurgery also went on: so it is very important to find the reasons and causes of the disease and prevent the causative factors. It is necessary to educate people about the symptoms of stroke and aware the doctors about the early and optimal diagnosis of stroke. Meanwhile, we must to try to replace the traditional treatment methods with the new treatment methods of stroke in the country.

For this Congress a number of European and American most famous professors of the most prestigious universities in the world such as America St. Louis University, University of Minnesota, the University of Chicago, University of Houston, University of Munich, Germany and America were invited as key speakers and we have also seen a significant presence of educators and researchers in medical field of all of the country.

Ariansalamat Sina Co. attended in this important conference as a sponsor and presented it´s useful and related products to professionals and physicians in the field.  Mrs. Borhani Haghighi the company´s scientific representative in Shiraz attended in the booth and answered to visitor´s questions.